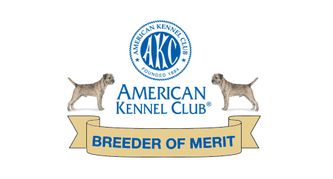 Our career in showing dogs started with boxers. We had our share of success, but we decided to get into a smaller breed of dog. We wanted a smaller dog but he had to be somewhat rugged and tough, we both decided on a border terrier. We got our first Border Terrier Mason from Skyline Border Terriers in Los Angeles, CA. She finished her career and is the love of our lives. 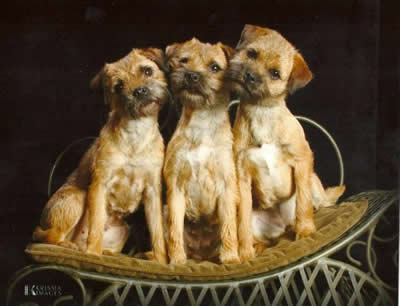 We knew we had to get another Border Terrier and we got Newman. He started his career in Denver and finished in 10 days at 10 months of age. We thought he should come home and grow up but Jorge and Susie convinced us to let him go to the Louisville circuit where he won 2 best of breeds over the top specials. The rest is history.

In April of 2008 he climbed to the #5 BT spot and by the end of May took the #3 BT spot. In June he won two groups, multiple placements, and continued to accumulate breed points which spiraled him to the #1 BT spot. Newman was invited and attended both the Eucanuba and Westminster shows. At Westminster, he received an Award of Merit and has since returned home to enjoy some time off.

We owe a special thanks to Debby Pomeroy of Otleys Border Terriers for giving us the opportunity to add Newman to our family. It is our goal and hope to keep improving the quality of our border terriers. Newman will be a tough act to follow.

Speaking of a tough act to follow, Newman’s daughter Itty Bitty has turned out to be a chip off the old block. She completed her championship before her first birthday winning 3 5 point majors and will be back in the show ring soon.

Members of the Border Terrier Club of America.